I was walking down Irlo Bronson Highway to the McDonalds for breakfast when I happened to see a billboard that stopped me in my tracks. Above me was a photo of a buxom young blonde cradling a Squad Automatic Weapon (SAW) and a belt of ammo in her hands. “Machine Gun America!” the sign screamed. “Shoot real machine guns! 1/2 mile ahead on the right!” It was almost enough to make me swell out my chest, hum the national anthem, and yell at the sky, “America, fuck yeh !!!” 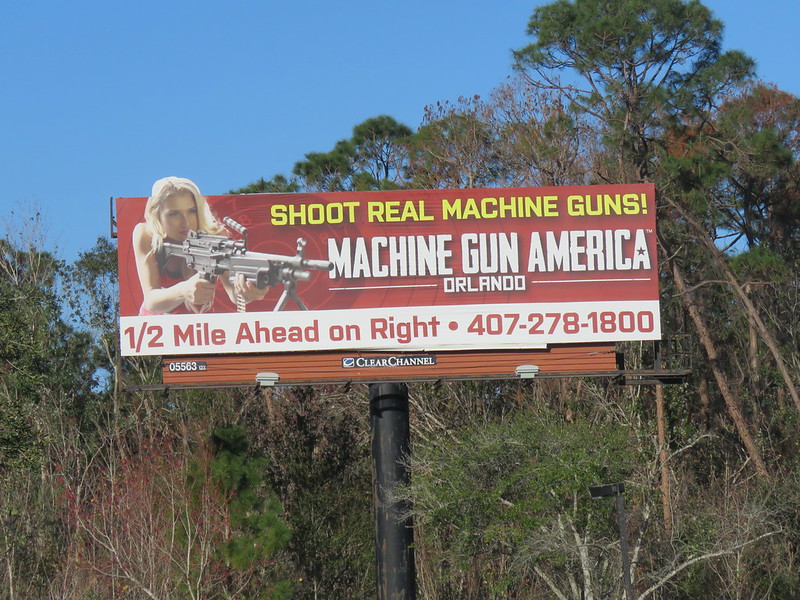 How could I pass that up?

So a few hours later, after an All-American breakfast courtesy of one of the largest sectors in our minimum-wage economy, I found myself in front of Machine Gun America, in a neon-covered red white and blue storefront, next to a flea market selling cheap counterfeits from China. There were more posters in the windows of under-dressed girls with guns, and a 20-foot American flag painted on the side of the building. Presumably in case I had forgotten what country I live in.

But since we live in America, and since, America being America, any discussion of “guns” always leads to vehement and mostly silly argument and rancor based entirely on emotional tribalism and political ideology, let me make my own position clear, then everyone can go ahead and tell me how wrong I am. As a kid growing up in rural Pennsylvania, I grew up with guns. We were poor (I grew up in a house without an indoor toilet) and hunting was a way to put meat in the spaghetti sauce. I learned to shoot by hunting groundhogs, and since I was a pretty good shot, we always had meat in the spaghetti sauce. Even though I stopped hunting later, I always continued target-shooting, and kept a pistol for going to the range right up until I started van-dwelling (there was no good reason for me to take the Walther along with me while traveling in the van, though, so I didn’t.) Like virtually every other kid in the area, I took the hunter safety course from the local NRA–back when it was an organization of hunters and gun-safety advocates, before it was taken over by John Birch Society wackos and went nutty.

Then, around the time I graduated high school, the United States itself was taken over by John Birch Society wackos and went nutty. Now, instead of sport rifles to shoot food, we preferred to have assault rifles to shoot each other. Not a month goes by without a school massacre or mass shooting somewhere in the US, and we as a society have decided that we’re OK with that and won’t do anything to stop it (other than “hopes and prayers”, which don’t seem to help any).

The US has of course always been a violent gun society. From the time of Bunker Hill to the time of Iraq and Afghanistan, our answer to every issue has always been to shoot or bomb the crap out of somebody. Of course, when you live in a past-its-prime “superpower” that is now a shithole country with a third world infrastructure and a population of simple-minded dolts who can’t find their own country on a world map, being an international armed bully is about all you have left to instill any sense of national pride. We’re at the bottom of virtually every list when it comes to education or health care or science–but by golly we’re still Number One when it comes to killing people, at home and abroad. USA !! Freedomz !! Second Amendment !! Make America White Again !!

So, here I was at Machine Gun America, celebrating the only thing that “makes America great”. The nice folks at the front desk had a number of options to offer me. For $50, I could fire off 25-rounds from a not-full magazine (I’ll call it a “clip” just to make the gun nuts in the audience get all pissy and self-righteous at me) in a military-grade M4 carbine. After that, the prices climbed almost as fast as the firepower, all the way up to the grand package, the “Man Card”—hoo rah!!–350 rounds from 12 different full-auto guns for $800 (plus tax). 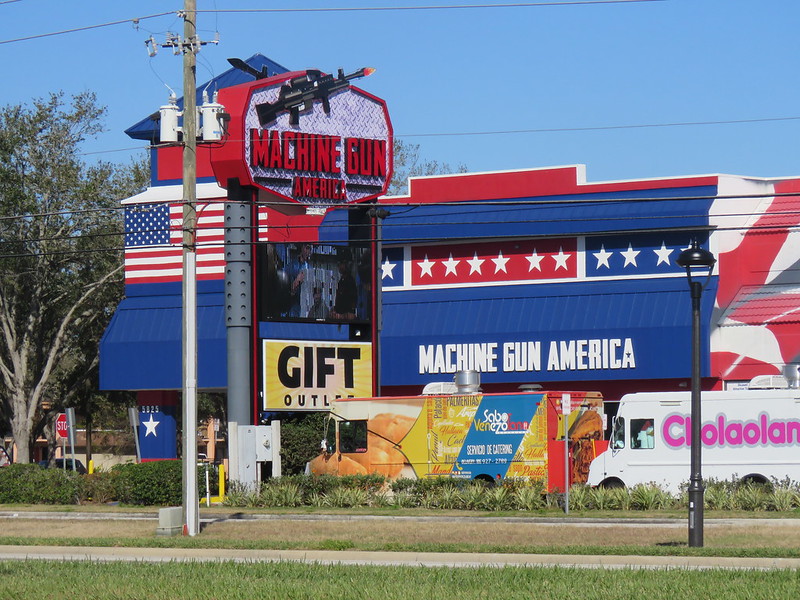 Yes, I know–it’s stupidly overpriced. The marketing seems to be aimed mostly at well-off foreign tourists from countries where guns are illegal, who are willing to pay through the nose for a minute or two of fantasy. And after all, this is Disney Domain, the most insanely commercialized tourist area on earth. I assume the sales folks are paid crap and get most of their money by commission, since they tried their damnedest to upgrade me to a more expensive package. But sadly, although I live in the, uh, greatest country in the world, like the vast majority of other Americans with our shit-wage service jobs I live not much better than a typical person in Iceland or Singapore does, so I chose the cheapest package. No “Man Card” for me. I’ll settle for the “Sissy Card” instead.

Then came the paperwork, and the lecture about safety rules. There was an incident a few years ago in Arizona when a little girl’s parents plunked down the fifty bucks to let their little darling shoot an Uzi submachine gun, since nothing could be more “American” than having a nine-year-old fire off some full-auto 2A freedom-projectiles, thereby demonstrating that for enough money, we’ll let anyone do any damn-fool idiotic thing. (“Free market”, ya know. And anyway, the only thing that can stop a bad school-shooter with a gun is a good third-grader with a bigger gun.) I mean, what could possibly go wrong…? Well, unable to control the muzzle recoil, the little girl accidentally shot and killed her instructor. Once the equally “American” ritual of lawyers flying back and forth was finished, the rules now specify that you have to be 13 (and accompanied by a parent) to shoot, and 16 to shoot full-auto. Oh, and you have to sign a waiver releasing the place from responsibility for your maiming or death.

My “Range Safety Officer” was certified by the NRA. Since he was a nice guy, I’d like to presume that he was one of the sane hunter safety type NRA guys rather than one of the crackpot John Bircher type NRA guys. It was his job to do…well…almost everything. He handed me a set of earmuffs and safety glasses, loaded the rounds into the mag, inserted the mag into the rifle, set the rifle on semi-auto or auto, cycled a round into the chamber, and handed the rifle to me. All I was allowed to do was aim downrange and pull the trigger. He was a hand’s breadth away from me the whole time (I presume to grab the gun if I went wild with it.)

You get to choose your target image. There is of course the standard round black bullseye. Or you can blast away at black and white photos of Osama Bin Laden or Saddam Hussein, suitable for framing and mounting in your living room later (so you can show all your friends “See, if I had been in Afghanistan and Iraq, we wouldn’t have lost“). Or, for a few extra bucks, you can drape a “Machine Gun America” t-shirt on the target stand and shoot at it–then take it home and proudly wear it full of holes. Me, I didn’t really need another torn-up t-shirt, and while I don’t mind punching paper targets full of holes, I do mind punching people full of holes, even if it is just photos of dead people that we don’t like. So I chose the plain ole boring bullseye.

For my first few shots, I asked to go semi-auto. I used to be a pretty good shot as a kid, and I wanted to see if I still was.  Pop, pop, pop, pop. Wow, not bad at all. It’s like riding a bike–you never forget how.

Then I went to full auto: “say hello to my little friend”. I didn’t want to just burn right through my ammo (I’d want at least an M60 Machine Gun to do that), so I fired in several short bursts. The M4, like most modern assault rifles, uses a round (I’ll call it a “bullet” so our gun nut friends can grit their teeth at me again) that is basically a souped-up .22 with extra powder, and recycles much of its gases to automatically operate the rifle’s bolt mechanism and allow for continuous fire. So the recoil was a lot less than the bolt-action .222 rifle I had used as a kid to hunt groundhogs. But surprise surprise it wasn’t like the movies, where you can fire continuously on target for ten minutes of screen time without reloading. In the real world, it takes some conscious effort to keep the muzzle from climbing with the recoil, so if you fire it all at once you’ll just be spraying copper-coated lead everywhere. And a full 30-round magazine will only last you for about 5 seconds of actual firing. So even with short bursts and aiming in between, I chewed up all my remaining ammo in less than twenty seconds.

And my adventure was over.  From “in the door” to “out the door” it lasted about a half hour. Was it fun? Yep, I sure got a bit of an adrenaline flow. Was it the most ridiculously expensive twenty seconds of fun I’ve ever had? It sure was–and they tried gamely to make it even more expensive for me by offering to sell me a video of my shooting (they tape everyone at the rifle range). I politely turned them down.

So now you can call me “Machine Gun Lenny”.  And if the zombies or the New World Order black helicopters ever come for me, I’m ready.

4 thoughts on “My Adventure at Machine Gun America Orlando”