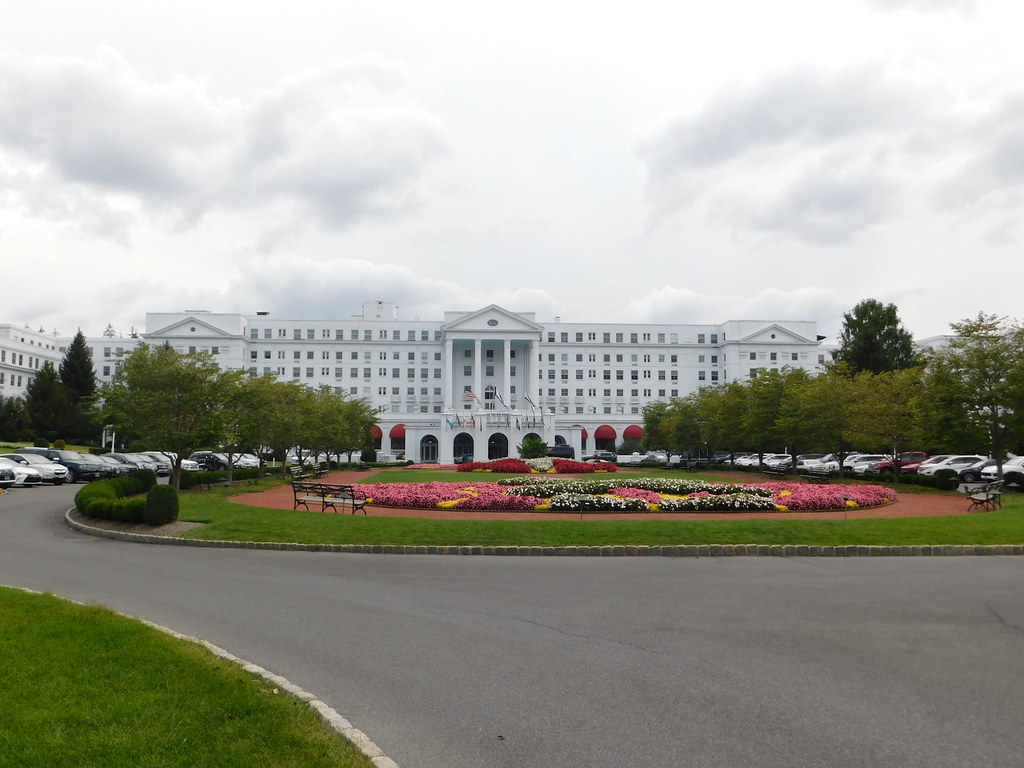 Not long after taking office, President Eisenhower began formulating a program called “Continuity of Government”, designed to insure that the US civilian government would remain functional in the event of an all-out nuclear war. Part of this plan involved constructing elaborate bomb shelters where the President, Congress, and the Supreme Court could survive an attack and be able to maintain communications and interact with each other and with the outside world. One of these bunkers, intended to protect both chambers of Congress, was later unintentionally revealed and declassified, and is now a tourist attraction.

In the 1800’s, when medical science was primitive, natural mineral springs and mountain air were thought to have curative powers, and an entire industry of “health spas” appeared. One of these was in the tiny mountain town of White Sulphur Springs in West Virginia. The Chesapeake and Ohio Railroad ran a line to the mineral springs here and built a luxury resort and hotel called “The Greenbrier”.

Over the next century, White Sulphur Springs became a popular vacation spot for railroad magnates, industrialists, government officials, and society elite, and was also used by the White House for hosting visiting foreign dignitaries. During World War Two, the resort was used to confine German, Italian and Japanese diplomats who were interred during the war. One of the wings also served as an Army hospital for American troops.

One of the people who visited the Greenbrier to play golf in the post-WW2 years was General Dwight Eisenhower. And so when the military was making plans for its Continuity of Government shelters, the Greenbrier was near the top of the list for a potential location. It fit all of the necessary criteria: it was located within five hours travel of Washington DC, it was remote enough to be safe from heavy nuclear fallout, it was accessible by highway, by train, and by air, and it already had experience working with the government on classified projects. During a state function held at the Greenbrier in 1956 with the Presidents of Mexico and Canada, Eisenhower undertook an additional secret side mission: he met with C&O Railroad officials and proposed a deal: the US Government would pay for the resort to construct a new wing for the hotel, if the military could use it as a cover to construct a Continuity of Government bunker underneath it. The secret project was code-named “Greek Island”.

It would be an immense undertaking. The West Virginia Wing of the hotel, constructed on top of a hill next to the main building, would have 88 luxury suites, a large area for trade shows and exhibitions, and a completely-furnished medical center. But it was only the visible tip of a hidden iceberg: the entire interior of the hill would be hollowed out to make room for a 112,000 square foot structure of 153 rooms on two floors (about the size of a typical Walmart), with reinforced-concrete walls five feet thick, thirty feet underground.

The government and the hotel did everything they could to hide the construction and pass it off as a mere new addition. The immense amount of dirt that was excavated for the bunker was spread around the grounds and packed down to make a new golf course. Most of the concrete and steel was delivered at night so it wouldn’t be noticed. But in the end it was simply impossible to hide something of this size. The construction workers who poured the 50,000 tons of concrete for the thick underground walls knew that they were not simply building a hotel wing. Rumors flew quickly, and it soon became something of an open secret among the locals that there was a bomb bunker under the West Virginia Wing of the Greenbrier—though nobody was sure who it was intended for. Most people assumed it was to shelter the President.

The Greenbrier’s West Virginia Wing (and the secret bunker underneath it) were completed in 1962—just in time for the Cuban Missile Crisis in October. Although no one was evacuated from DC during the Missile Crisis, the Greenbrier bunker was placed on alert. At around this time, a 7,000-foot runway was added to the tiny local airport—ostensibly for tourists, but in reality to allow Air Force cargo planes to bring evacuees by air instead of by train.

The bunker then spent the next 30 years in obscurity.

In 1992, a reporter for the Washington Post openly exposed the shelter’s existence, and revealed that it had been intended as a “relocation center” for the US Congress in case of nuclear attack, sheltering up to 1100 members of the House and Senate and their staffs for as long as six months. By this time, however, although it had been steadfastedly maintained in operating condition since 1962, the bunker was already long obsolete and virtually useless. When it was being constructed, it was assumed that any nuclear weapon reaching the US would be delivered by Soviet bombers flying over the North Pole, and this would give four or five hours of advance warning—plenty of time for Congress to be evacuated to “Greek Island”. But by the mid-60’s both the United States and the Soviet Union had ICBM missiles capable of delivering thermonuclear warheads to each other in just 30 minutes. Even by air it was not enough time to reach the bunker.

The day after the newspaper story ran, the Pentagon began dismantling and decommissioning the facility. It took three years to remove all the classified electronics and communications equipment. The C&O Railroad (now CSX Railroad) no longer owns the Greenbrier and its bunker (it was purchased privately by the Governor of West Virginia), but a subsidiary of CSX has leased much of the underground space for a huge data storage facility.

Today, the hotel runs regular 90-minute guided tours into portions of the bunker. (Sadly, because of the data facility’s security needs, no photography is permitted inside the facility.)

Visiting the facility today, tourists enter through the Exhibition Hall. This was part of the “overt” bunker, which was regularly and routinely used by the hotel guests and clients without being aware that it was part of a large secret underground complex. (The rest of the bunker was “covert” and hidden from the public.) Throughout the 70s and 80s the hotel hosted dozens of conventions and trade shows in the Exhibition Hall. In reality, it was built as a workspace for Congressional staffers, and in the event of an attack, the entire space would have been closed off by a massive 25-ton steel blast door hidden behind some wall panels. Despite their immense size, they were not capable of surviving a hit with a nuclear weapon—the bunker’s safety was completely dependent on its secrecy.

Convention guests were also given the use of two auditoriums, known as the Governor’s Hall and the Mountain Room. These were actually intended as chambers where the US Senate and House of Representatives could meet: built for functionality rather than comfort, they were furnished with school-type chairs and folding writing desks, and a series of microphones.

In an actual evacuation, however, this is not where all of the Congressmen would have entered. Arriving at “Greek Island” by train or Air Force jet, some of them would have been escorted to a plain utility door sunk into a hillside with a sign reading “High Voltage—Do Not Enter”, behind which lay a long concrete corridor. In peacetime, this was the service entrance where supplies could be delivered. But in time of attack, this became a secondary Decontamination Area. Arriving Congressional members and staffers (both male and female) were stripped of all their clothing. (The contaminated garments were burned in an incinerator, which doubled as a crematorium in case someone died inside the shelter from injuries or radiation poisoning.) They were then taken through a high-pressure shower to prevent any radioactive fallout from getting into the bunker, and issued a set of ordinary US Army fatigues and a pair of canvas sneakers.

The accommodations inside the shelter were in sparse contrast to the swank five-star rooms in the hotel above them. There were 18 dormitories (2 of which were set aside for women) with row after row of double-high metal bunk beds, a single locker shared by both occupants, and a small locking drawer for each to keep personal items.

The bunker was designed to be completely independent from both the hotel and from the local utilities. Three redundant diesel generators provided electricity to run the facility. Large underground water tanks held enough for 60 days, and boxes of military C-rations and MREs would feed everyone. Regular deliveries insured that there was always a two-week supply of fresh fruits, vegetables, and meats in stock. (The underground cafeteria, which could hold 400 people at a time, has now been converted by the hotel into a culinary school.) The bunker was also equipped with a 12-bed hospital and clinic, with surgical facilities and a pharmacy. An elaborate ventilation system pulled in air from outside, filtered it of any radiation or potential chemical/biological weapons, and then expelled it through an exhaust hidden in a utility shed.

As the West Virginia Wing opened, the Greenbrier began employing a company called Forsythe Associates to install and maintain the hotel’s cable TV service and 1,000 television sets. It was a cover: they were actually security-cleared military personnel whose real job was to maintain and periodically upgrade all of the various electronic and communications equipment inside the bunker. There was a radio room with cryptologic code machines, a computer room which was capable of using an early version of “email”, and a security network which monitored all the internal doors and fire alarms as well as external sensors for detecting intruders and radiation. In addition, the facility contained an armory with weapons and ammunition—not to protect the bunker from outsiders (the blast doors would keep all the civilians away), but to maintain order inside the shelter.

One room was devoted entirely to “media”. It contained a full TV and radio studio, allowing Congressional leaders to address the nation (or what was left of it) over the Emergency Broadcasting System. On the walls were painted backdrops of the Capitol Building and the White House (in case the President and Vice President were killed in the attack and the Speaker of the House or the President Pro Tem of the Senate had to assume the office).

Today, about 55,000 people visit the Greenbrier bunker each year.