When most people think of “RV camping”, they immediately picture the advertising images of people sitting in lawn chairs next to their camper, by a lake, with the sun shining and everyone gathered around a barbecue grill. In reality, of course, the weather isn’t always so idyllic; it gets hot in the summer, it gets cold in the winter, and it rains in between.

On the one hand, people in camper vans can deal with seasonal weather better than people in houses can. In a house or apartment, you are stuck year-round in one place, and have to deal with the weather as it arrives throughout the year. In a camper van, however, you are mobile, and can move to whatever weather you want. As long as you have the gas, you can be anywhere in the country within a week. In Florida, vacationers who live in the north during the summer and who move south to Miami to spend the winter are known as “snowbirds”. RVers and van-campers are the ultimate snowbirds. To avoid the heat, we go north; to avoid the cold, we go south. Just like the birds.

On the other hand, though, people in RVs or camper vans have disadvantages. While we can move freely and follow whatever weather we like, we still have times when it will be unseasonably hot or cold. Even in Florida, there will be stretches of winter days when it will drop below freezing at night, and even in Minnesota there will be summer days when it gets into the 90s. People in houses or apartments have air conditioners and furnaces to deal with the weather; people in campers have only what they can fit into their van.

Vans, of course, like all vehicles, have built-in heaters and air conditioners. Long-distance truckers, who usually spend the night in their vehicles, depend on these. The diesel engines used in 18-wheeler rigs use very little fuel when idling, so it is a common sight to see trucks parked in the Walmart lot with their engines running all night, to power the cab’s heater or A/C.

For van campers, though, this isn’t really an option. Not only will it suck up a lot of gas, but the sound of an idling engine will attract the attention of everyone who walks by, which is something we want to avoid.

So, how do you deal with hot days or cold nights while living in a Walmart parking lot?
Let’s start with keeping cool. A camper van is essentially a metal box on wheels, which sits out in the sun all day. As you can imagine, it gets hot in there. Really hot. On a summer day when it is 85 degrees outside, the inside of a camper van can easily reach over 100 degrees during the afternoon. You can of course leave the windows open a bit to let the heated air out, or install a roof vent, but these have limited effectiveness—it will still unavoidably get very hot inside the van during the day.

On vans with windows in the back, I have seen some ingenious ways in which people have rigged up ordinary household air conditioners to cool the inside of the van. These of course use a lot of electricity, and require a very large solar panel array and battery storage capacity. And there is no way to be “stealthy” with a big humming A/C hanging out the side of your van. 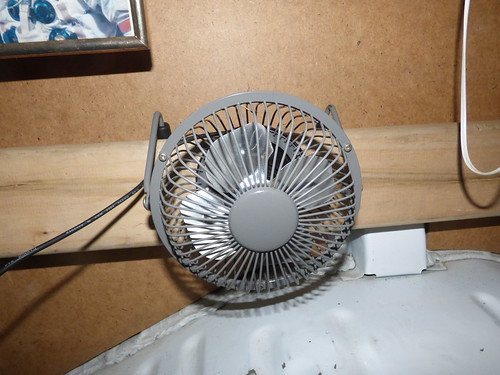 My solution is a simple one—I avoid the heat by not being in the van during the day. By doing all my housekeeping tasks in the morning while it’s still cool, I can be out of the van before it begins to heat up. And by not returning home until 8 o’clock or 8:30, I can get back to the van after it has already cooled off in the evening air. Even if it’s 95 during the day, it will usually have cooled off inside the van to 80 or so by the time the sun goes down. If it’s still warm inside the van when I get back, I use a small electric-powered fan that runs off the solar system: it’s wattage is so low that I can run it overnight if I need to, without depleting the battery too much. It’s enough to stay comfortably cool while I watch TV, read, and sleep.

When it comes to staying warm, there are similar solutions. Some people use small electric space heaters in their van. But like electric A/C’s, these use a huge amount of power, and you’ll need a very large solar system to run them. Another option are the small propane-powered heaters intended for tent campers. These run off the same propane canister-bottles that backpacking stoves use. They give pretty good heat and will keep you warm through the night. But they burn through fuel pretty quickly, and you’ll be constantly replacing the propane canisters. You do not want to ever use a gasoline or kerosene fueled space heater, intended for a house, inside a van. They create fumes and carbon monoxide that are deadly in an enclosed space. And if you are using any combustion-type heater, such as propane, a carbon monoxide/carbon dioxide monitor is cheap and potentially life-saving.

In many ways, the problems of staying warm in a van are the same as those of a backpacker—both of us want to warm ourselves with materials that use no fuel or electricity and don’t take up much space. So it is no surprise that the best solution can be found in the backpacking section of the sporting-goods store: the sleeping bag.

For maximum flexibility, I keep three sleeping bags in the van, each for a different temperature range. “Summer” sleeping bags are just a thin flannel blanket with a zipper. They are intended for mild summer conditions where it doesn’t get below 75 or so at night. They are also intended to be used as “liners” for heavier bags. “Temperate” sleeping bags are usually rated down to about 55-60 degrees. (Sleeping bag ratings, btw, should be taken with a grain of salt—though everyone’s metabolism is different and everyone feels temperatures differently, I find that the rated temperatures on most sleeping bags are five or ten degrees warmer than reality—a 60-degree bag is really good for about 65-70 degrees.) For most people, these will keep you warm for most of the year, perhaps with a liner added on particularly cool nights. Finally, I have my “cold-weather” bag, rated to 35 degrees. Cold-weather bags have improved greatly since I was a kid. Back in the 70’s when I was hiking the Appalachian Trail, winter sleeping bags were made with goose down; they were heavy, bulky, and they didn’t work if they got wet. Today, “mummy bags” made with synthetic fibers are light, thin, and weatherproof. A good cold-weather sleeping bag will keep you toasty on virtually any winter night you are likely to regularly face as a snowbird. 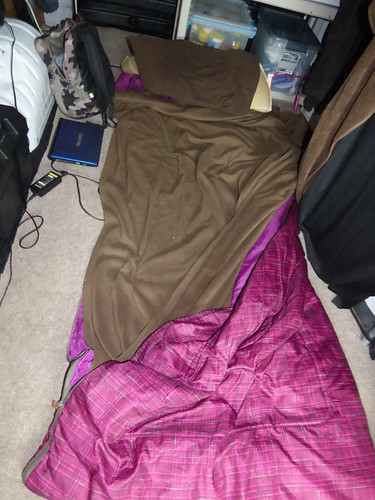 No matter where you are, however, there will always be winter nights when it gets exceptionally cold. One way to deal with these occasional nights is to layer a couple of sleeping bags together, one inside the other. But if it gets too cold for you to be safe, the best solution is to find a motel, wrap yourself in a nice warm blankie, turn up the heat, and watch “Game of Thrones” reruns all night.

3 thoughts on “Keeping Warm and Cool”